If you are looking forward to buying a land or constructing in cameroon, wisdom construction enterprise is here to help you. We have a dynamic team of real estate experts to assist you.

Other lands are available in Douala. You can always contact us for all your landed property needs. We are always here to help you. Please kindly fill and submit the form below. Our real estate agents will contact you within 24 hours to discus more on the subject.

The Southwest Region or South-West Region (French: Région du Sud-Ouest) is a region in Cameroon. Its capital is Buea.[2] As of 2015, its population was 1,553,320. Along with the Northwest Region, it is one of the two anglophone (English-speaking) regions of Cameroon. Various Ambazonian nationalist and separatist factions regard the Sud-Ouest region as being distinct as a polity from Cameroon.[3] 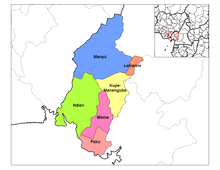 Douala is the largest city in Cameroon and its economic capital. It is also the capital of Cameroon’s Littoral Region. Home to Central Africa’s largest port and its major international airport, Douala International Airport (DLA), it is the commercial and economic capital of Cameroon and the entire CEMAC region comprising Gabon, Congo, Chad, Equatorial Guinea, Central African Republic and Cameroon. Consequently, it handles most of the country’s major exports, such as oil, cocoa and coffee, timber, metals and fruits. As from 2018, the city and its surrounding area had an estimated population of 2,768,400.[1] The city sits on the estuary of Wouri River and its climate is tropical.